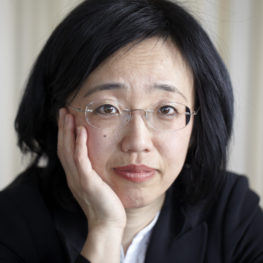 Pianist Hiroko Sakagami lives in Switzerland. She spent her childhood and student years in her home country, Japan. Hiroko had her first piano lessons at the age of six. Indeed, from an early age, she had resolved to become a professional pianist. After studying music at high school she graduated in music at the Tokyo National University of Fine Arts and Music. The winner of numerous national and international competitions, Hiroko received a government scholarship from the Swiss Confederation and elected to study as a soloist under Hubert Harry at the Lucerne Conservatory. Here she completed her training as soloist, graduating magna cum laude, the first time ever the Conservatory had awarded such a distinction. Hiroko gained further artistic impulses from Nikita Magaloff, who was to become her most influential mentor. Impressed, he recalled: “The first time I heard her play I knew I had an exceptional talent before me.” In 1987 Hiroko won first prize at the Concours Clara Haskil. She has since performed concerts in many cities throughout Europe, North America and Japan. Guest performances have taken her not just to Switzerland’s neighbouring countries, but also to Ireland, Poland, Bosnia-Herzegovina, Romania and Canada. Hiroko has also performed at numerous international festivals such as the Printemps des Arts de Monte-Carlo, the Menuhin Festival Gstaad, the Lucerne Festival and the Settimane Musicali in Ascona. Hiroko also gained touring experience as a soloist, playing with ensembles such as the Tokyo Philharmonic Orchestra and the Festival Strings Lucerne. Hiroko’s repertoire focuses on piano works of the classical and romantic periods. Hiroko’s artistic approach to the works of Mozart, Schubert, Schumann and Chopin and her interpretation of Beethoven, Debussy and Scriabin combine into a unique idiom, virtuosity and creative intensity that are always true to the composition. Hiroko has also appeared as a soloist on numerous radio and CD recordings. Since 1987 Hiroko has been a lecturer at the Lucerne School of Music (part of the Lucerne University of Applied Sciences and Arts), passing on her wealth of experience to her students. She has also given Master Classes in Germany, Romania and the British Columbia University in Vancouver, Canada.