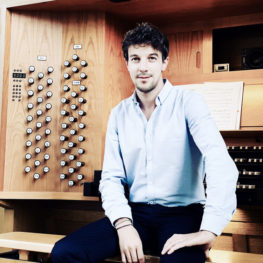 The organist and harpsichordist Johannes Berger, one of the outstanding organists and harpsichordists of his generation, was born in Rosenheim/Germany and received lessons on various keyboard instruments from an early age. He studied the Organ, Harpsichord and Church Music in Munich, where his formative teachers were Harald Feller and Christine Schornsheim. He then continued to pursue his studies in Amsterdam with Jacques van Oortmerssen and in Salzburg with Reinhard Goebel.

Johannes Berger is winner of the Concours international d’Orgue in Lausanne in 2011and winner of other national and international competitions. He has held the position of Titular Organist and Custodian of the world’s largest open-air organ in Kufstein in Austria since 2009 and is artistic director and harpsichordist of the Baroque Orchestra Concerto München.

In addition to an extensive solo career throughout Europe, he regularly collaborates with orchestras such as the Munich Philharmonic Orchestra, the Bavarian Radio Symphony Orchestra and the Mahler Chamber Orchestra.