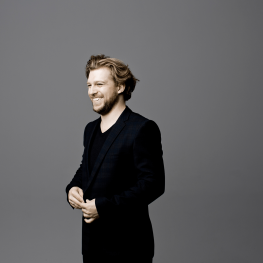 Julian Prégardien, born in Frankfurt, was trained in the Limburg Cathedral Choir and went on to study voice at Freiburg Musikhochschule. In opera, concert and Lied repertoire, he enjoys widespread success in equal measure on an international scale. He has gained particular acclaim in the tenor part of the Evangelist in the passions and oratorios of J. S. Bach under the baton of Peter Schreier in the Munich Philharmonie and Philippe Herreweghe at the Lincoln Center in New York. During the 2014/15 season, he will also perform Bach cantatas on tour with René Jacobs, and in Barcelona and Paris he will sing the Christmas Oratorio conducted by Christophe Rousset. Under the baton of Andrea Marcon he will likewise perform the Mass in B Minor with Berlin Radio Symphony Orchestra, as well as a series of Bach cantatas with Bavarian Radio Symphony Orchestra; he will also go on tour singing the St Matthew Passion with Le Concert Lorrain conducted by Christoph Prégardien. Further collaborations in the 2014/15 season include Mozart’s Requiem with the Deutsche Kammerphilharmonie Bremen and the Bavarian Radio Chorus under Peter Dijkstra, and Haydn’s Creation with Christoph Poppen conducting the Cologne Chamber Orchestra. On the opera stage, Prégardien has recently sung the part of Jaquino in Fidelio (Deutsche Kammerphilharmonie Bremen under Paavo Järvi), Eurimedes in Telemann’s Orpheus, Tamino in The Magic Flute, Jason in Charpentier’s Medée and The Novice in Billy Budd at Frankfurt Opera. At Aix-en-Provence Festival he sang the roles of Nencio in Haydn’s L’infedeltà delusa and Belfiore in Mozart’s La finta giardiniera. With the title An die Geliebte, Julien Prégardien’s first solo recording was released in early 2014 on the Myrios Classics label, featuring Lied repertoire accompanied by Christoph Schnackertz at the piano – a release that reaped high praise from the critics. Julien Prégardien has given Lieder recitals at numerous festivals so as Davos Festival, Menuhin Festival Gstaad, Rheingau Music Festival, Mecklenburg-Vorpommern Festival, Styriarte Graz, Maggio Musicale Fiorentino, Schubertiade in Schwarzenberg The singer also enjoys presenting distinctive chamber music programmes. In 2010, he premièred his own arrangement of Schumann’s Liederkreis cycle for string quartet and improvised piano intermezzos with Michael Gees and the Gémaux Quartet. In 2014, in collaboration with the Ricercar Consort, he devised a “Schubertiad” featuring Lied arrangements, instrumental works and texts by Schubert and his contemporaries, arranged for flute, guitar and barytone viol. That project will be released by Myrios Classics as Prégardien’s second solo CD in 2015. Since 2013, Julien Prégardien has been teaching the oratorio class at the Hochschule für Musik und Theater in Munich.