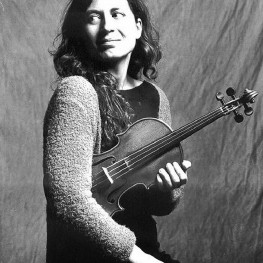 Muriel Cantoreggi studied the violin with Regis Pasquier, Wiktor Libermann and Christoph Poppen. In 1993, she was the laureate of the international Marguerite Long and Jacques Thibaud competitions. She served as first solo violin of the European Union Youth Orchestra from 1994 to 1996 and as first solo violin of the Münchener Kammer–Orchester from 1995 to 2008. As a soloist, she performs with famous conductors such as Heinz Holliger, Juha Kangas and Thierry Fischer. An assiduous chamber player, the artist was a member of the Végh Ensemble and regularly plays as a duo with the violist Geneviève Strosser. Her repertory covers a wide range of styles, but she is particularly interested in contemporary music, as testified by her numerous recordings with ECM label. Since 2009, she has been a member of the teaching staff at the Hochschule für Musik in Freiburg im Breisgau.