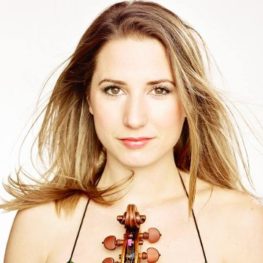 Rosanne Philippens is an extraordinary communicator, with an innate musicality and an infectiously joyful yet sincere approach to music-making. She is in high demand across the Netherlands where she performs regularly in the major halls and series both as soloist and chamber musician. She is also a keen play/director and recently made her debut with the Orchestre National de Lyon leading the orchestra in a hugely successful performance of The Seasons by Vivaldi and Piazzolla in Lyon’s Auditorium receiving the highest praise from players and management. Philippens’s playing is refined, exuberant and profound, and was described by the Dutch daily paper De Telegraaf as “energetic, sensitive and flawless”.

Recent highlights include performances with the Rotterdam Philharmonic at De Doelen, Netherlands Radio Philharmonic in the prestigious Zaterdag Matinee series and the Residentie Orkest both in The Hague and at the Concertgebouw Hall, Amsterdam. Elsewhere Philippens has played with the Barcelona Symphony, the Ulster Orchestra, Vancouver Symphony, Winnipeg Symphony and with orchestras across Germany, Finland and Switzerland, with conductors including Yannick NézetSéguin, Lawrence Foster, Otto Tausk, Jan-Willem de Vriend, Antony Hermus and Nicholas Collon.

In recital and chamber music, Philippens plays regularly with artists such as István Vardai, Vilde Frang, Julien Quentin, Vikingúr Olafsson, Amihai Grosz, Camille Thomas and Zoltán Fejérvári in festivals and halls across Europe. A strong believer in breaking down barriers in classical music, she runs her own concert series ‘The Amsterdam Salon Pop-Up’, presenting high-quality concerts in carefully sought-out and unusual locations in an intimate salon atmosphere.

Philippens records exclusively for Channel Classics. Her latest CD Insight represents the culmination of a very special and personal journey for Philippens; the choice of works by Bach, Enescu and Biber and the order in which they were recorded was inspired directly by the feedback gathered from audience members during a solo European tour. Her album Dedications, featuring works by Kreisler, Fauré, Ysaÿe and others received a five-star review in the Dutch De Volkskrant and glowing praise from Gramophone and BBC Music Magazine, and her recording of Prokofiev’s 2nd Concerto was described by BBC Magazine as “a triumph”. Rosanne Philippens was taught from an early age by Anneke Schilt at the Amstelveen music school. She continued her studies at the Royal Conservatory of The Hague and the Hanns Eisler Academy in Berlin with Coosje Wijzenbeek, Vera Beths, Anner Bylsma and Ulf Wallin, receiving the highest distinction from both institutes. Philippens won first prize at the Dutch National Violin Competition in 2009 and the Freiburg International Violin Competition in 2014. Philippens plays on the 1727 Barrere Stradivarius, thanks to the generous support of the Elise Mathilde Foundation.