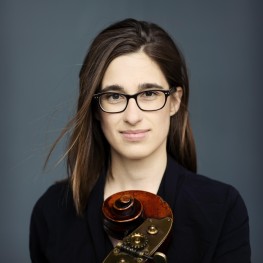 The bass player Sophie Lücke was born at Wernigerode (Germany) in 1988. She started her music studies with Janne Saksala at the Hochschule für Musik “Hanns Eisler” in Berlin when she was 5. She got her Master at the London Guildhall School of Music and Drama in Rinat Ibragimov class, in 2012. She went on studying with Esko Laine, Klaus Stoll, Kristin von der Goltz and Reihard Goebel. She got her maturité and succeeded in entering the Berlin Symphonic Orchestra Academy of the radio and got a grant from the Berlin Karajan Academy of the Philharmonic Orchestra. She plays with many well-known orchestras, such as The Köln Radio WDR, the Freiburg /Baden-Baden SWR, the Scottish Chamber Orchestra, the Bremen Kammerphilharmonie, The Resonanz Ensemble, The Modern Ensemble, the Basel Kammer Orchester and as a soloist with the Baden-Baden Philharmonic Orchestra. She is intensively dedicated to chamber music and she has worked with personalities, such as Mitsuko Uchida, Heinz Holliger, K. Amstrong and with members of the Berlin Philharmonic Orchestra. In the “Chamber music connects the world” she used to play with Andras Schiff, Gidon Kremer, Yuri Bashmet and Tatjana Gridenko. Since 2010, she is annually invited to the Mecklenburg-Vorpommern Festival and she has played with the Danish String Quartet, Doric String and Notos as well as with the Vivente Trio. She got a grant from the Hans and Eugenia Jütting Foundation and was helped by Ann Driver Trust. From 2011 to 2013, she was the bass player solo of the München Chamber Orchestra and from the Paris “Les Siècles” Orchestra. Since 2014-1015 she is the bass player solo of the München Staatstheater am Gärtner Platz. She taught at the Bern High School of Music in 2013-14 and she has given master classes in Hong Kong, Pyöngyang, Sao Paulo and Mexico City.