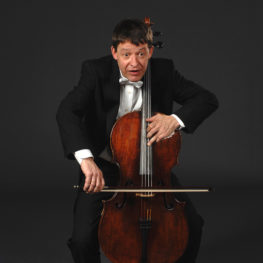 Thomas Grossenbacher was born in Zurich and he is the First Cello solo at the Zurich Tonhalle. After studying the cello with TatjynaValleise, Mischa Frei and Claude Stark at the Zurich Academy, he got his teaching diploma. He improved himself with David Geringas at the Lübeck Academy and he got his virtuosity with distinction. Menahem Pressler, Robert Mann, György Ligeti and Alfred Schnittke have as well had a great influence on his artistic development. Thomas Grossenbacher plays in Europe, in the United States, in Japan and participates to a lot of Festivals, such as Ernen, Davos, Aspen, Ittingen and Gstaad. As a soloist he has worked with David Zinman, Sir John Elder, Armin Jordan and Sir Antonio Pappano and as a chambrist with Radu Lupu, Leon Fleisher, Hélène Grimaud, Joshua Bell and the Zurich Carmina Quartet,. His interpretation of “Don Quichote” by Richard Strauss with the Tonhalle conducted by David Zinman – the CD of which has been produced by Arta Nova – has been greeted internationally and awarded a prize by the BBC-Music-Magazine as the best recording of that work. He teaches at the Zurich High School of Music and at the Theater School. Many students taught by him have won international competitions and have important functions in well-known symphonic orchestras.