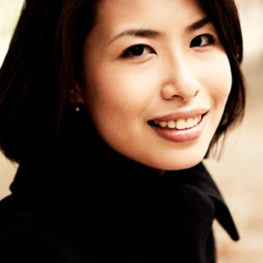 Tomoko Akasaka is a versatile violist who is appreciated for her extraordinary charisma and stage presence as soloist and chamber musician. She won numerous international awards, including the first prize at the 12th International “Japan Classical Music Competition” and the 3rd prize at the 53rd International Music Competition of ARD (2004). She has appeared as soloist with the Bavarian Radio Symphony Orchestra, the Munich Chamber Orchestra, Kremerata Baltica, the Orchestre de Chambre Genève, the Ensemble Contrechamps, the Filarmonica Banatul Timisoara, the Venezuelan Symphony Orchestra and the Japan Chamber Orchestra under conductors such as Seiji Ozawa, Johannes Kalitzke, Rüdiger Bohn, Gheorghe Costin, Olivier Cuendet, Roman Kofman and Günther Herbig. Tomoko Akasaka’s chamber music partners include  Gidon Kremer, Yuri Bashmet, Daniel Hope, Juliane Banse, Heinz Holliger, Menahem Pressler, Julian Steckel, Andreas Ottensamer, Daishin Kashimoto, the Kuss Quartet and many more with whom she performed at international music festivals such as Lockenhaus, Salzburg Festival, Pablo Casals Festival, Verbier, Lucerne, Kissinger Sommer, San Francisco Musical Days, Olivier Messiaen Festival, Zagreb Chamber Music Festival, Kronberg Cello Festival, Alba Music Festival and Schubertiade. Tomoko Akasaka was playing at the Concertgebouw Amsterdam, the Tonhalle Zurich, the Mozarteum Salzburg, the Victoria Hall London and the Grand Theater in Geneva, the Konzerthaus and the Philharmonie Berlin, Elmau Castle, Suntory Hall Tokyo and Nymphenburg Castle Munich. Lately, she has given recitals in Switzerland, France, Italy, Germany and Japan, a concert series in Tokyo has been broadcast by the NHK TV throughout Japan. Tomoko first started playing the violin at the age of five and went to the special school of the Toho Music University. After graduation, she studied at the Liszt Academy in Budapest, Hungary. Shortly after her return to Japan, she switched to the viola and studied at the Toho Tokyo University until the age of 21. After that, Tomoko continued her studies at the Geneva Music Conservatory with Nobuko Imai, whose assistant she was at the same time. In addition, she was a guest professor at the Music Conservatory of Neuchatel. Her musical relationship with György Kurtág has a profound influence on her as a musician. She also regularly collaborates with Helmut Lachenmann, Toshio Hosokawa and has performed numerous contemporary works for viola. Tomoko Akasaka joined the Amaryllis Quartet in 2016 and currently lives in Berlin.