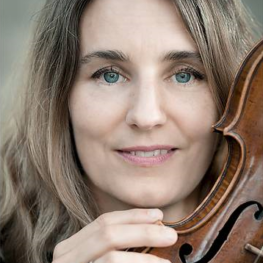 Hanna Weinmeister was born in Salzburg in 1969, and whilst still at school she studied under Bruno Stein-schaden at the Mozarteum in Salzburg. After matriculating she studied first under Gerhard Schulz at the Vienna Musikhochschule, and then for two years in the Master Class of Zakhar Bronn in Lübeck. At an early age Hanna Weinmeister won several first prizes in the “Jugend Musiziert” competition for young musicians. In 1989 she won first prize in the Stefanie-Hohl competition in Vienna, and was a prize winner in the 5th International Mozart Competition in Salzbug in 1991, and also in the Concours International Jaques Thibaud in Paris in 1994. In 1995 she won the international Parkhouse Award in London.
She has appeared as a soloist with such conductors as Heinrich Schiff, Heinz Holliger, Franz Welser-Möst, Christian Zacharias, Eliahu Inbal and Hans Graf, and has made guest appearances with the Munich Philharmonic Orchestra, the Berlin Symphony Orchestra, the South German Radio Orchestra in Stuttgart, the Zurich Opera Orchestra, the Salzburg Mozarteum Orchestra, the Bruckner Orchestra in Linz, the Calgary Symphony Orchestra, the St Louis Symphony Orchestra, and the English Chamber Orchestra.
In high demand as a partner in chamber music, she has appeared with Heinrich Schiff, Heinz Holliger, Gidon Kremer, Alexander Lonquich and Alexey Lubimov among others. She is also a member of the Tetzlaff Quartet and the Weinmeister Trio. Since 1988 Hanna Weinmeister has been first concertmaster of the Zurich Opera Orchestra, and has a violin class at the Music and Theatre Hochschule in Bern.
She plays the Bennett Stradivarius of 1692, which has been placed at her disposal by the Winterthur Insurance Company.