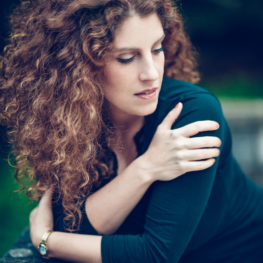 Sarah Wegener approaches every role with intensity, as if it were chamber music. She captivates listeners with the richness and warmth of her voice, in performances such as Mahler’s 8thh Symphony under Kirill Petrenko in Bregenz, Eliahu Inbal in Hamburg and Kent Nagano in Montreal, as well as in her War and Peace programme shaped around works by Handel and Purcell, which she also presented at the SWR Schwetzingen Festival. Her “marvellously radiant voice, as powerful as it is rich in colour” (Frankfurter Allgemeine Zeitung) distinguish her as a Lieder singer of the highest order, as shown on her highly praised current CD Into the Deepest Sea.
Her remarkable versatility has ensured long-standing collaborations with her musical partners, including the conductors Kent Nagano, Emilio Pomàrico, Peter Rundel, Tonu Kaljuste, Heinz Holliger and Frieder Bernius. Concerts and recitals have taken her to the Salzburg Festival, Schleswig-Holstein Musik Festival, the Rheingau Music Festival, the RuhrTriennale and the Handel Festival Halle, as well as the Alte Oper Frankfurt, the Konzerthaus Berlin, the Tonhalle Zürich, the Vienna Konzerthaus, the Concertgebouw Amsterdam, the Philharmonie Köln, the Casa da Música Porto and the Bozar in Brussels. She has sung leading opera roles at the Royal Opera House in London, the Deutsche Oper Berlin, Wiener Festwochen, the Theater Bonn and the Staatstheater Saarbrücken.
Highly regarded as a performer of both classical and romantic repertoire as well as contemporary compositions, Sarah Wegener recently sang Dvořak’s Stabat Mater and Haydn’s Sieben letzte Worte (Philippe Herreweghe, Orchestre des Champs-Élysées, Collegium Vocale Gent), Hans Werner Henze’s Floß der Medusa (Vienna Radio Symphony Orchestra, Cornelius Meister) and Strauss‘s Vier letzte Lieder (Styriarte Graz) as well as Schönberg’s Six Orchestral Songs in Saarbrücken. She has given the premiere of numerous works by Georg Friedrich Haas, including the opera Bluthaus, for which she was chosen as Singer of the Year in 2010 by Opernwelt magazine. Recently she appeared on stage as Maiden in Toshio Hosokawa’s chamber opera Futari Shizuka (director: Thomas Israel) at the Tongyeong International Festival.
Sarah Wegener’s discography includes recordings of Korngold’s Die stumme Serenade, Schubert’s Lazarus and Mozart’s C minor Mass, Fauré’s Pelléas et Mélisande, Rossini’s Petite Messe solennelle as well as works by Heinz Holliger and György Kurtág.Into the Deepest Sea, her first Lieder recording with the pianist Götz Payer, was released in November 2017 on CAvi-music. At the OPUS Klassik 2019 she was nominated as Singer of the Year for Jörg Widmann’s work Labyrinth III, in which the composer dedicated the solo part to her.
After a successful end to last year’s season with Ligeti’s Requiem under Jonathan Nott in Tokyo, Sarah Wegener once again takes on the title role in Schumann’s Das Paradies und die Peri in performances with Le Cercle d’Harmonie and Jeremie Rhorer at the Beethovenfest Bonn along with Beethoven concert arias at the the MDR Musiksommer. Other highlights of the 2019/20 season include concerts Henze’s Das Floß der Medusa in Yekaterinburg, Beethoven’s Missa Solemnis under Andrew Manze in Liverpool and under Thierry Fischer in Sao Paulo, Mozart’s Requiem in Lille and one European tour of Mahler’s 8th Symphony with the Gustav Mahler Youth Orchestra under Daniel Harding.
Following her double bass studies, the British-German soprano studied singing with Prof. Jaeger-Böhm in Stuttgart and took part in masterclasses with Dame Gwyneth Jones and Renée Morloc.