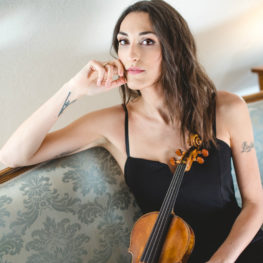 Winner of the 2015 Respighi Prize 2015, Irene Abrigo has made her Carnegie Hall debut in 2016 with the Chamber Orchestra of New York, performing the NY première of the violin concerto by Dirk Brossé “Black, White and in Between”. In 2016 she also performs in Brazil the south America première of the Respighi’s Violin Concerto No.1 and she had her debut with the West Czech Symphony Orchestra in Czech Republic, with the Mozart Violin Concerto No.5. She had premiered several pieces included the “Infal’s Songs” for solo violin by Antonmario Semolini (dedicated to her), and chamber music works by Richard Dubugnon. Today she’s regular guest in music festivals and concert series all over Europe.​ ​Deeply convinced about the social responsibility of art, Irene founded in 2015 POURQUOIPAS, a no-profit association organizing concerts, masterclasses and projects with social commitments. Truly passionated since young about Niccolò Paganini (she has his signature tattooed and she owns an original letter from him, dated 1831), Irene created with POURQUOIPAS an educational experience titled “Niccolò Paganini: Le Mystère”: a one hour itinerary discovering truth and mysteries of the composer’s life, that ended with a final concert. ​Irene Abrigo started playing the violin at the age of 4 at the Aosta Suzuki School. She continued her education in the University of Arts in Switzerland and Austria with Marie-Annick Nicolas, Pierre Amoyal and Corina Belcea and took part in masterclasses with Zakhar Bron, Thomas Füri, Viktor Pikayzen, Itzhak Rashkovsky, Mayumi Seiler and Benjamin Schmid. ​Graduated at Liceo Classico “XXIV February” in Aosta, she had in 2008 her Diploma at the Turin Conservatoire, in 2011 her Master of Interpretation at the Geneva University of Arts, in 2015 the Degree in Art, Literature and Performance (DAMS) at the University of Turin with a thesis about Niccolò Paganini, and in 2018 she obtained the Pedagogy Master at the HKB, Bern University of Arts. ​She’s currently playing a violin by Giovanni Battista Guadagnini, Milano 1757, generously on loan to her from a private collector.