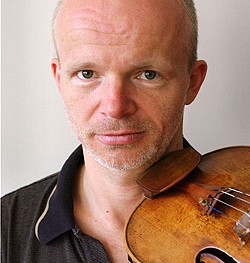 Thomas Zehetmair’s ability to skillfully blend his musical interests is unparalleled. He enjoys widespread international acclaim not only as a violinist, but also a conductor and chamber musician, making him one of the most prominent artistic personalities of today. Since the 2019/20 season he is Chief Conductor of the Stuttgarter Kammerorchester as well as from now on of the Orchestre national d’Auvergne.  Chief conductor from 2016 to 2021 of the Musikkollegium Winterthur, he took up the challenge to record  all four Brahms symphonies (Claves) and third Bruckner symphonie (Deutsche Grammophon).  Zehetmair is also invited to conduct Konzerthausorchester Berlin, Mozarteum-Orchester Salzburg, Orchestra of the Eighteenth Century, Scottish Chamber Orchestra, Irish Chamber Orchestra ,Svetlanov Symphony Orchestra, Helsinki Philharmonic, Séoul Philharmonic, Rotterdam Philharmonic and Seattle Symphony Orchestra. He was Chief Conductor of Orchestre de Chambre de Paris between 2012 and 2015, and Artistic Partner of St. Paul’s Chamber Orchestra. Taking the helm of the Royal Northern Sinfonia as Principle Conductor in 2002, he sculpted it into one of England’s leading orchestras during his term ending in 2014 and continues to stay connected to the orchestra as Conductor Laureate. A number of recordings document his exceedingly prolific work with the orchestra.

Thomas Zehetmair has recorded the largest works of repertoire for the violin; many of his releases have earned multiple awards. These recordings include, among others, B. A. Zimmermann’s violin concerto with the WDR Sinfonieorchester under Heinz Holliger (“Diapason d’Or de l’Année“ 2009), 24 Paganini Caprices (Best List of the “Preis der deutschen Schallplattenkritik“ 2009, Midem Classic Award 2010), a recording of Elgar’s violin concerto with the Hallé Orchestra Manchester under Sir Mark Elder (Gramophone Award 2010) and Mozart’s violin concertos with the Orchestra of the Eighteenth Century under Frans Brüggen, acclaimed as a reference recording. In addition, the recording “Manto and Madrigals” with his duo-partner Ruth Killius appeared in 2011 at ECM, where contemporary works for violin and viola can be heard.His latest CD release is Bach Six Sonatas and Partitas for solo violin, selected by the New York Times as one of “The 25 Best Classical Music Tracks of 2019”, named by Die Zeit as one of their favourite recordings of 2019 and winner of the Opus Klassik 2020 for the best solo recording.

Thomas Zehetmair is the founding member of the Zehetmair Quartett, with which he was awarded the Paul Hindemith Prize by the City of Hanau in November 2014 in recognition of outstanding musical achievement. The Zehetmair Quartett’s recordings of  the Schumann, Bartók and Hartmann quartets are acclaimed by critics and public.  For his far-reaching artistic contributions, Thomas Zehetmair was awarded, among others, the certificate of honour by the Preis der Deutschen Schallplattenkritik as well as the Karl Böhm Interpretation Prize by the federated state of Styria.

Thomas Zehetmair is an honorary doctor at the University of Music Franz Liszt in Weimar and Newcastle University.