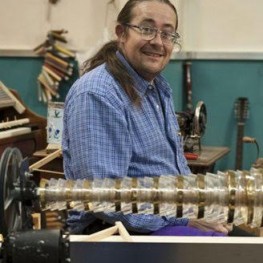 Matthias Würsch studied at the Basel Musik-Akademie where he got his soloist diploma; then he improved himself with Jean-Pierre Drouet in Paris. He used to play with many orchestras such as The Basler Kammerensemble, Ensemble Modern (Frankfurt), Ensemble Contrechamps (Geneva), The B.E.A.M., Ensemble Phoenix (Basel) and still Basel Concertino. As a soloist, he was invited to a lot of Festivals as well as to Radio and TV Broadcasts in Switzerland and in foreign countries. He got a strong reputation as a glass harmonica interpreter and Hungarian cymbalum; that is why he collaborated with orchestras such as The French National Orchestra, the Norddeutscher Rundfunk Orchestra, The Paris Orchestra, The OSR, The Bavarian Radio Orchestra, and with famous conductors namely Sylvain Cambreling, Michael Gielen, Lorin Maazel, Semyon Bychkov and Charles Dutoit. Matthias Würsch participated as a soloist to the creation of many works by Heinz Holliger, Vinko Globokar, Henri Dutilleux and of many other well-known composers too. In 2008, he was granted of The Werkpreis für Musik by the Canton of Basel-Landschaft. He is not only a performer but also  intensively  devoted to other ways of artistic expression such as the percussion teaching at the Basel High School of Music.