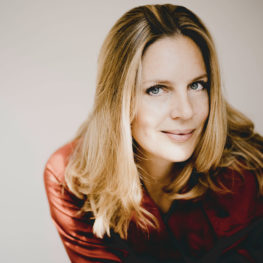 With a voice that is warm, wide-ranging and dark-hued, and commanding a repertoire that extends from the baroque to the present day, German-born soprano Sophie Klussmann is in demand as a concert singer, as a recitalist and on the opera stage. In recent seasons her engagements have included a world tour of Mozart concert arias with Martin Haselböck and the Wiener Akademie, and performances and recordings of 20th century music with the Berlin’s Scharoun Ensemble, the pianist Oliver Triendl and a variety of other partners. Over her career to date she has collaborated with such conductors as Vladimir Jurowski, Marek Janowski, Ingo Metzmacher, Helmuth Rilling, Marcus Bosch, Michael Gielen, Michael Sanderling, Karl Heinz Steffens and, in the field of historically informed performance, Marcus Creed, Václav Luks and Attilio Cremonesi. Her career has taken her to such venues as the Berlin Philharmonie, Vienna Musikverein, Zurich Tonhalle, Amsterdam Muziekgebouw, Théâtre du Châtelet in Paris, New York City Center and the Concert Hall of the National Grand Theatre Beijing and HongKong. Sophie Klussmann numbers Thomas Quasthoff, Dunja Vejzovic, Margreet Honig and Klesie Kelly-Moog among her mentors. From 2009 to 2011 she was a member of the Halle Opera, singing a variety of soprano role, and in Halle and at the Komische Oper Berlin she gave the world premieres of two operas by the composer Christian Jost. In 2013, at the Baden-Baden Easter Festival, she covered Anna Netrebko in the role of Donna Anna, while 2016 brought her debut as Micaëla (Carmen) in Wuhan, China. She also enjoyed a long-term international collaboration with American actor John Malkovich on the theatre pieces The Giacomo Variations and The Infernal Comedy. In 2019, she debuted as Rosalinde (Fledermaus) at the opening production of the Bad Hall Festival Austria. Sophie Klussmann is a keen interpreter of song and chamber repertoire and in 2015 her first solo CD was released on the Capriccio label. She is a regular guest at Chamber Music Festivals such as Kuhmo Finland, Kempten Germany, Rheingau Germany and sang in 2019 at Musikfest Berlin.