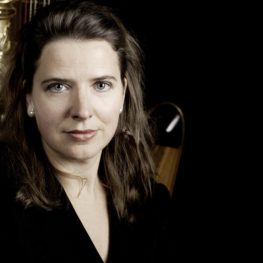 Sarah O’Brien is an extraordinarily versatile harpist who proves that the harp is no longer to be confined to a narrow Romantic frame but has a voice of its own, from baroque to contemporary literature. Sarah O’Brien has been principal harpist with the royal Concertgebouw orchestra Amsterdam and the Munich philharmonic for over 20 years. In 2014 she decided to concentrate her work on her teaching and devoting more time to her students, she is professor of harp at the University of arts Zurich and the University of Music, Basel. Her students are prizewinners of international competitions and winners to orchestra positions. Before her positions in Switzerland, Sarah O’Brien was professor at the Mozarteum Salzburg and the Music Hogeschool in Rotterdam, next to her work in the orchestra. She has taught as guestprofessor to the Music Universities of Munich and Amsterdam, the Sibelius Academy Helsinki, the Juillard school New York, and the summerclasses in Montepulciano, Italy. She is member of Jurys for International Competitions and orchestra auditions. Sarah O’Brien studied at the conservatoire de Musique de Genève with Catherine Eisenhoffer and concluded her studies wit a premier prix de virtuosité in 1991. Further studies with Pierre Jamet, Paris and Susann McDonald, Indiana University, school of music, Bloomington, USA. She was prizewinner of the Concours d’execution musicale (CIEM) Geneva in 1997. 1991-1994 winner of the study grant of the Ernst Goehner Stiftung Zurich. 1988-1998 harpist of the Sabeth Trio Basel. Winner of the swiss chamber music competition Migros. A number of internationally known composers, such as Kaija Saariaho, Nicolaus A.Huber, Rudolf Kelterborn and Walter Feldmann have dedicated works to the Trio. Concerts at Festivals in Germany and concert series in Switzerland as well as Rome, Paris, Copenhagen. Her position as principal harpist to two of the worlds most reknown orchestras, has led her on tours through Europe, Asia as well as USA. Concerts the most famous halls worldwide. To work with such conductors as Zubin Metha, Bernard Haitink, Riccardo Chailly, Christian Thielemann, James Levine, Lorin Mazel and many many others, is and has been very enriching. She performed as soloist with the Concertgebouw Orchestra under Bernard Haitink and Hans Vonk, with the Munich Philhamronic under Hartmut Haenchen, the orchestra de la Suisse romande under Fabio Luisi, the Radio Sinfonie orchestra Basel and National Polish Radio Orchestra, the Zurich and Basel chamber orchestras and many more. 1992-1998 member of the new music ensemble ‘Musikfabrik NRW’. At all festivals and concert series for new music. Sarah O’Brien is working or has worked regularly with such composers as: Luciano Berio, Heinz Holliger, Mauricio Kagel, Wolfgang Rhim, Hans Zender and Klaus Huber. Numerous CDs and radio recordings as soloist and chamber musician as well as orchestra recordings. Guest speaker at radio productions or live-emissions. She is equally a lectorer for new publications in harp literature for the HP editions London and the Henle Verlag Munich.