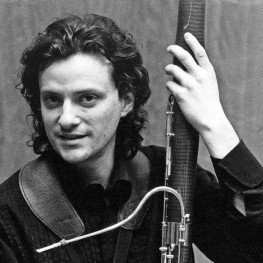 Diego Chenna studied with V. Menghini at the Turin Music Conservatoire and with Sergio Azzolini at the MHS in Stuttgart. In those same years, he played with the Gustav Mahler Jugend Orchester and the European Union Youth Orchestra directed by Claudio Abbado, who had invited him to play in Lucerne Festival Orchestra and to cooperate with Orchestra Mozart, as a teacher, first bassoon and soloist. In 1998 he won the first prize at the “Fernand Gillet International Competition” in U.S.A. and started his career as a soloist and chamber musician; as a soloist, he performed with Rai Orchestra Nazionale della Radiotelevisione Italiana, Orchestra da camera di Mantova, Camerata Bern, Camerata Zürich, Moscow Soloists, European Union Chamber Orchestra, Georgian State Symphony Orchestra, Kammerakademie Potsdam, Beethoven Academie (Antwerpen) and many others. In “Mozart year 2006” he performed the bassoon concerto K 191 with the “Kremerata Baltica”. As a first bassoon player, he cooperated with The Chamber Orchestra of Europe and the World Orchestra for Peace directed by Valery Gergiev. Being an appreciated chamber musician, his name appears in various important European festivals, playing with such artists as Heinz Holliger, Alexander Lonquich, Gidon Kremer, Maurice Bourgue, Yuri Bashmet, Patricia Kopatchinskaja, Mario Brunello, Michel Portal, Jacques Zoon a.o. His ceaseless search in the music field often leads him to move on beyond the classical repertoire of his instrument, onto innovative grounds: the rediscovery of forgotten music, the development of new execution techniques, the utilization of live electronics and the creation of a new repertoire nowadays represent his main interest. Many composers have dedicated some of their works to him. Presently he’s bassoon Professor at the Freiburg i. B. Musikhochschule and Visiting Professor for contemporary music at the University of Luzern.