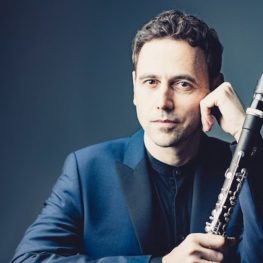 Clarinetist Thorsten Johanns is highly sought after and esteemed in equal measure for his stylistic versatility and keen communication skills as a soloist, orchestral and chamber musician, and teacher.

Aged only 22, he received his first engagement in 1998 as deputy principal clarinet in Essen Philharmonic whilst still a student of Ralph Manno at Cologne University of Music. Three years later he became principal clarinetist of the WDR Symphony Orchestra Cologne, holding this position until 2015, and returning since as a regular guest.

Thorsten Johanns is the first and, to this day, only German clarinetist to have been personally invited by music director Alan Gilbert on several occasions to play with the New York Philharmonic Orchestra. Further guest engagements as principal clarinetist have taken him to Berlin Philharmonic, the Bavarian Radio Symphony Orchestra, Munich Philharmonic and the NDR Elbphilharmonie Orchestra, amongst others. As a soloist, Thorsten Johanns performs regularly with renowned orchestras and conductors. These have included Sir Neville Marriner, Semyon Bychkov, WDR Symphony Orchestra Cologne, the Orchestre de chambre de Paris, Stavanger Symphony Orchestra and the Romanian National Radio Orchestra. Alongside notable string quartets (ARIS, Auryn, Diogenes, Minetti), his chamber music partners include the oboist and composer Heinz Holliger and the pianist and composer Moritz Eggert. Thorsten Johanns is a member of the internationally active “Ensemble Raro”, the “Deutsche Bläsersolisten” and also the celebrated ensemble “Spectrum Concerts Berlin”.

In 2014 Thorsten Johanns was appointed professor of clarinet at the University of Music Franz Liszt in Weimar. Furthermore, he gives regular masterclasses and has been invited for this purpose to China, Australia, Canada, Germany, Scandinavia and Holland.